Between October and December we have two terms of five weeks each with a one week holiday in the middle.  The first week of each term will be an immersion week, where we will immerse ourselves in our new topic.  In the remaining four weeks we will do all sorts of hands on and writing activities to consolidate all we learnt in that first week.  We will then take a one week break before starting the second term.  This is an attempt to prevent the kind of tiredness I had at the end of this year.

These are my preliminary thoughts about all I would like our little school to achieve during those first two terms prior to Christmas.

These first two terms will be primarily about the crusades.  The children have chosen to get a head start on their studies over the summer by reading all their historical fiction books set around the crusades.  I always find fiction a useful way of bringing a historical period alive.  We will be focussing our efforts on the third crusade and in particular the characters of Saladin and Richard III.

I thought this would be a good time to do a country study of Saudi Arabia, and a recap of Israel.  We will also be studying the Islamic and Catholic religions and their roles in the Crusades.

For our literature studies I intend to continue studying Dante’s Inferno from his Divine Comedy.  Alongside Dante we will do a brief picture study of Botticelli’s Inferno, in addition to a comparative study of Gustave Dore and Salvador Dali and their interpretations of Dante’s inferno. 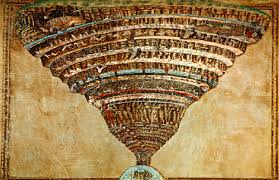 Our Art study over these two terms will be to look at Illuminations during the middle ages and as an extension our artist study will be focussed on the Limburg Brothers.

Not being musical in the slightest, I’m not very reliable at seeing this through.  I ought to hand it over to Gary, given that he is self-taught drummer and guitarist and leads worship at our church.  Medieval music is not his thing, however, so it is falling onto my very inept shoulders.  We will be attempting a composer study of Guillaume de Machaut (yes, you might well recognise him as the composer we should have studied last term.  Ahem.  I did cover everything else on the list….except, that is, for the hymn study.  Music again.  Not my strong point.)  I have a book and cd with his music.  I intend to make it as simple as possible.  We will probably also listen to some middle age Arab music on YouTube.  And that will be it.

We have a book of medieval recipes which we intend to cook from at least once a week.  I also have a couple of recipes which are fairly authentic fare for the travellers in the crusades, which we will attempt.

Although, at first, I had planned to do a study of a medieval scientist, I think it is more likely we will do a generalised study of a selection of scientists around at this time.  In addition, we will be continuing with our Anatomy and Physiology; learning about the effects of yeast in our Incr-Edible Science and extending our knowledge of natural based cleaners and the use of essential oils in our Spar-Klean Science.

Maths will be the rest of year 8 CIMT for T11, a free English maths curriculum and I intend to do a more individualised path of maths learning for my girls, which will ultimately be free of any curriculum.  It seems to be working well this summer, especially for my maths phobic girl, so we have decided to continue until Christmas, when we will reassess.

Hands on learning is the cornerstone of our home school and yet the crusades do not lend themselves to many hands on projects.  I have had to delve deep to find an interesting whilst effective way to teach this period.  I have come up with one or two things and I am starting to get excited by the possibilities of these two terms, even though they will not follow our usual pattern of a stack of hands on activities.

At the end of the second term we intend to have one of our presentations covering the crusades.  We used to have a couple a year but last year only managed one.  They are such fun and a huge learning opportunity as well as a consolidation exercise for the children.  I am determined to fit one in before Christmas and a second before next summer.

I’ll post all our resources nearer the time.  I need to pare them down!

Like Loading…
← One Year Pond Study Week 20: Checking in on the Chicks
→ Helping a Struggling Maths Student: Dumping the Curriculum (at least for a while)